Picturing Incarceration: The WWII Sketches and Paintings of Kango Takamura

Photographs and moving images of World War II incarceration have helped keep memories of that era alive for decades. But since cameras were largely forbidden inside the camps, few images from the point of view of prisoners exist. Though not permitted to take photos, Kango Takamura documented his wartime experience at Santa Fe and, later, Manzanar through expert sketches and watercolors. Like the better-known works of Mine Okubo, Takamura depicted camp life with a keen and sometimes darkly humorous eye.

“You are not allowed to shoot photographs. That’s why I sketch exactly what was, everything I saw. It was exactly like this,” Takamura later recalled. [1]

Born in Kumamoto-ken, Japan in 1895, artist Kango Takamura immigrated to the United States when he was seventeen years old. He lived in Hawai’i for ten years, then his interest in the motion picture industry brought him to New York. There, he worked at the Paramount Studios before relocating to Hollywood. He took a job in Los Angeles with RKO studios, where he worked on film projects like King Kong (1933) and retouched publicity photographs. He aspired to be an assistant cameraman but was told he was “too short, too small.”[2]

After he arranged to sell a motion-picture camera to a visiting Japanese general, Takamura aroused the suspicion of the FBI. He later explained that he was simply looking to make a little extra money. [3] Nevertheless, he was placed under observation and then arrested shortly after the Pearl Harbor bombing. He was held at the Santa Fe detention facility for several months, then relocated to the Manzanar concentration camp. His images and handwritten captions, paired with recollections from an interview he conducted at age 88, reveal intimate details of daily life in both facilities. Caption on reverse: “Panorama of Santa Fe Internment Center. Drawn on writing paper – with anxiety – during early days when I was not sure that drawings of any kind were permitted.” Santa Fe, New Mexico, April 26, 1942. Courtesy of Manzanar National Historic Site and the Kango Takamura Collection. Since Takamura was initially uncertain about whether or not his sketches were permissible, he often gave them a cartoonish effect in order to make them seem more benign.

“As you know, we cannot use any camera. So I thought sketching’s alright. But I was afraid I was not supposed to sketch. Maybe government doesn’t like that I sketch…so I work in a very funny way purposely, made these funny pictures.” [4] Caption: “His bald pate shined as bright as a full moon. At first they inspected the barracks three times a night, waking us. Later, they stopped this.” Santa Fe, New Mexico, 1942. Courtesy of Manzanar National Historic Site and the Kango Takamura Collection. “Very often we play baseball. This is the kitchen band. And always the umpire says ‘fifty-fifty’—nobody wins or loses. Always fifty-fifty. And after that, they made noodles for people, you see. So people appreciate so much. This is the way we play. And sometimes the ball runs over the fence and then the guard would come down and get it. He liked it so much.” [5]

Takamura also saw symbolism and beauty in the natural world. Caption: “Our pet hawk died on May 22. The following day Mr. Sato of Chula Vista died. But same day over 80 of us internees were released.” Santa Fe, New Mexico. May 22, 1942. Courtesy of Manzanar National Historic Site and the Kango Takamura Collection. 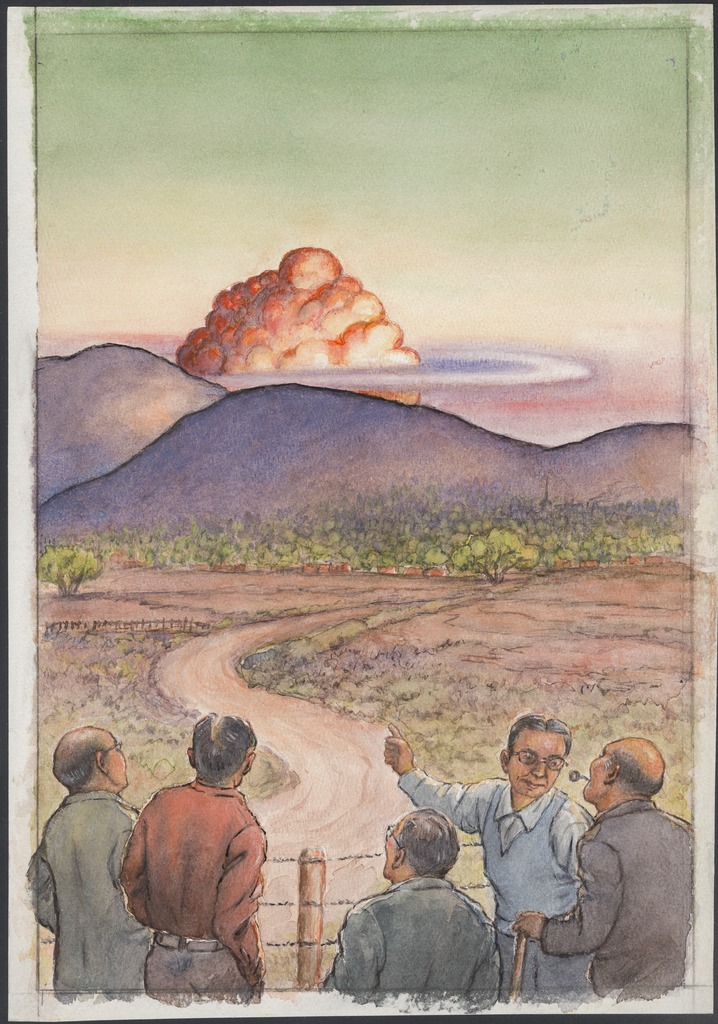 “One day we saw a wonderful cloud to the South. It was evening time. Oh, it was a big cloud. All pink. I had never seen this kind of cloud before. Really I was surprised. So we called it a ‘lucky cloud.’ ‘Look at that cloud. It won’t be long, this war,’ we said. So everybody was very happy.”[6]

After several months at Santa Fe, Takamura was relocated to the War Relocation Authority camp at Manzanar, California. He was reunited with his wife, daughter, son-in-law and granddaughter, and remained there until the war ended in 1945. Takamura documented his travel from Santa Fe to Manzanar concentration camp. Caption: “Mojave, Calif. We waited for our bus here for seven long hours in a desert windstorm – after we disembarked from the trin [sic].” Mojave, California. June 15, 1942. Courtesy of Manzanar National Historic Site and the Kango Takamura Collection. Caption: “We stopped briefly at a small town – Needles, they said. To our pleasant surprise, Japanese workers brought us boxes of food.” Needles, California. June 15, 1942. Courtesy of Manzanar National Historic Site and the Kango Takamura Collection. Takamura recalled the beautiful mountains surrounding Manzanar, but also that it was hot and windy. “It is miserable, really,” he said. But after a year, more shade trees had grown and camp infrastructure had been developed. He adapted to camp life, continued making art, and took on a post as the head of a small camp museum. Years later, Takamura spoke almost fondly of his time in the concentration camp, calling it “peaceful” and “not so miserable.”

Takamura’s deep sense of patriotism sometimes drew the ire of his fellow prisoners. After a snowstorm had lodged the door to his family’s barrack shut, he remembers thinking, “I thought maybe people had nailed down the door. I thought that because some people thought my family was too much pro-America.” [7] The majority of Takamura’s paintings and sketches reflected daily life at Manzanar, from school to agricultural production to special occasions. Caption: “Progress after one year. The mess hall line” and “Wall painting by Takamura.” Manzanar, California, May 14, 1943. Courtesy of Manzanar National Historic Site and the Kango Takamura Collection. 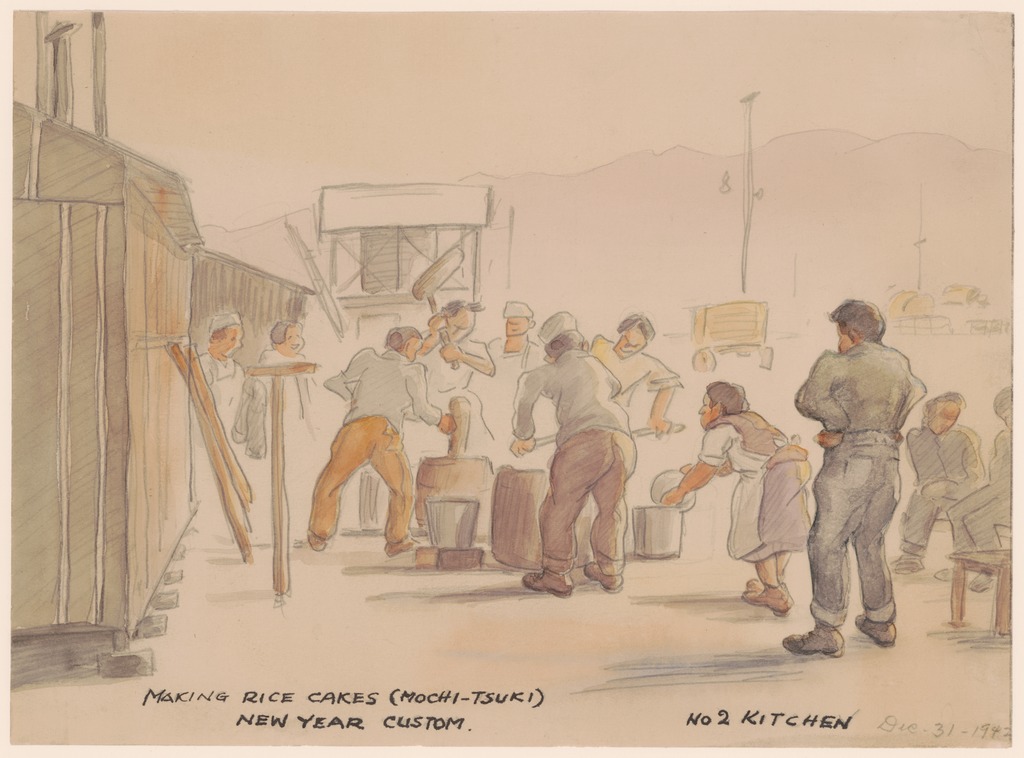 Caption: “Roll call is taken. This was the first day of school he study hall. Converted from a former mess ahll, resounded with laughter as Mr. Vanderjagt aide would call a name a squeaky soprano would respond ‘Here,’ only to be followed by an off-pitch bass ‘Heah.'” Manzanar concentration camp. October 8, 1942. Courtesy of Manzanar National Historic Site and the Kango Takamura Collection. 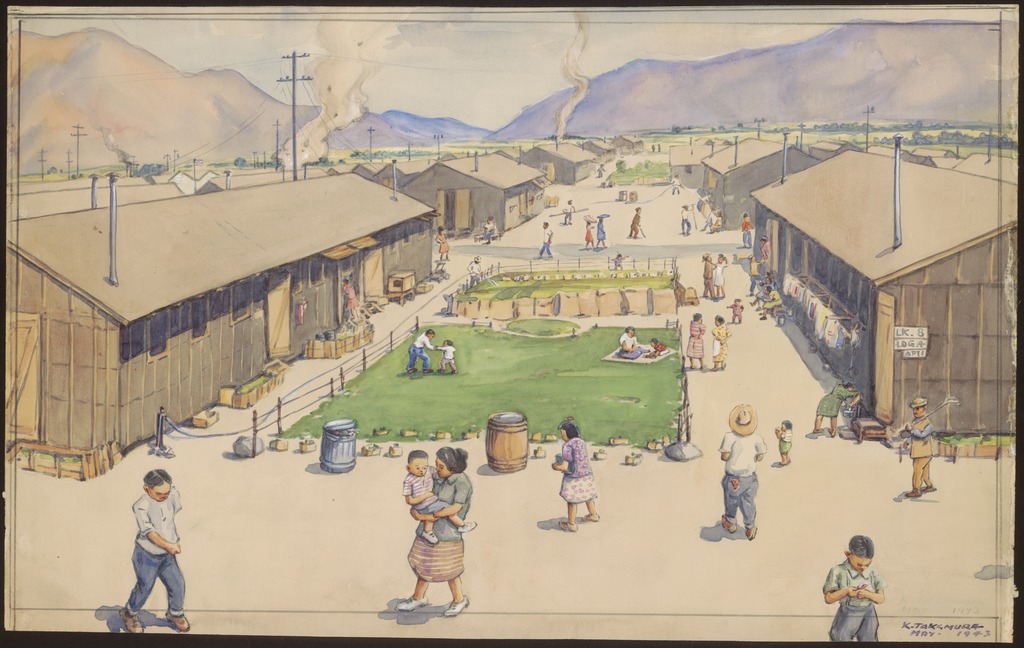 After the war, Takamura returned to Los Angeles and resumed his post at RKO Studios. He remembered, “I came back to RKO Studios after the war and people were really surprised to see me. I’m retoucher, you see, and the president usually never says, ‘Good morning’…but when I came back to the office, the manager and the president came to my place and welcomed me back. Twenty-five years I continued to work over there, until 1957 when they closed the studio.”

Takamura lived in Los Angeles until he passed away in January 1990 at age 94. Despite the discrimination and hardship he suffered in his lifetime, he remained unflaggingly optimistic about America. At 88 he said, “I enjoy this country so much. A nice life, I had.”