This weekend, cities along the west coast will hold their annual Bon festivals. Bon Odori communal folk dances are a central part of the bon festival, a Buddhist summer ceremony in which the spirits of departed ancestors are welcomed back to the world of the living for their annual visit. A national custom in Japan by the Edo period, bon festivals became a big part of Japanese immigrant life in the continental United States and Hawai’i before World War II. Bon dances are a series of communal dances performed by men, women, and children alike while moving in a circle around musicians—or sometimes recorded music—on a central platform called a yagura. Dancers often wear yukata, and some dances involve the use of fans, sticks or other implements. The specific dances may differ from region to region and came to incorporate elements of local cultures (e.g. hula movements in Hawai’i) as well. Though ostensibly a somber occasion, the festival and the dancing generally takes on the celebratory air of a summer festival.

Bon dances also took place in many of the camps that held Japanese Americans during World War II. Most Japanese Americans spent the summer of 1942 held in temporary “assembly centers,” and many held bon festivals in those centers.[1] Later, in the large War Relocation Authority camps, festivals drew thousands of participants and spectators and were an activity enjoyed by Issei and Nisei alike. They also took place in some of the smaller internment camps run by the army or Justice Department. Bon dancing even took place in the all-male environment of the Santa Fe Internment Camp, with some Issei men dressing as women to add to the festivity.[2] Bon festivals and dancing remain a major part of Japanese American community life today. 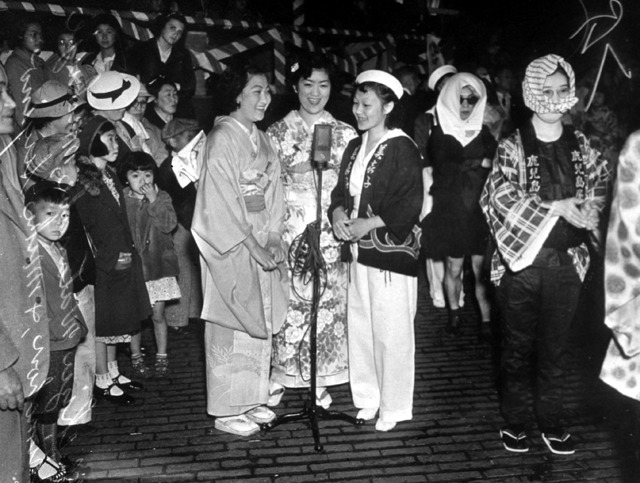 Before World War II, the Bon Odori festival took place on Main Street in Seattle’s Nihonmachi, or Japantown, 1935. Courtsey of the Museum of History & Industry. Bon odori dancers, Seattle, 1935. Courtesy of the Museum of History and Industry. Original WRA caption: Granada Relocation Center, Amache, Colorado. Although music for the Bon Odori held August 14, was furnished by phonograph records and a loud speaker, it was supplemented by the two drummers shown. They are, left to right, Koshiro Kumagai and Jutaro Gondo. The Bon Odori was sponsored by the Granada Buddhist Church. August 14, 1943. Courtesy of the National Archives and Records Administration. The Bon Odori dance festival was held on Main Street in post-WWII Seattle, 1950. Courtesy of the Seattle Buddhist Temple Archives, the Ogawa Collection.