While the incarceration of people of Japanese descent throughout Latin America has been the focus of a number of studies, little has been written about interactions between Hispanic and Japanese American communities in the United States during World War II. In honor of Hispanic Heritage Month, we present a brief history of wartime intersections between Hispanic and Japanese Americans, examining both the lived experiences of individuals and how they were represented in popular culture.

The  remarkable story of Ralph Lazo is perhaps the best known to Japanese Americans. High school student from Los Angeles who voluntarily went with his Nisei friends to Manzanar in 1942. Of Mexican and Irish descent, young Ralph Lazo (1924–92) grew up among Nisei, many of whom attended Belmont High School with him.

Though not subject to forced removal and incarceration, Lazo opted to join his Nisei friends at Manzanar as a show of support and as a protest against injustice. He was among the very few inmates of non-Japanese descent in any of the War Relocation Authority administered camps and perhaps the only one who was not the spouse of a Japanese American. He left Manzanar to serve in the army and went on to a career as a teacher and counselor, retaining ties to the Japanese American community through his life. He is the subject of the 2004 film, Stand Up for Justice: The Ralph Lazo Story. Guy Gabaldon was another young man of Mexican descent whose life intersected with Japanese American history. Gabaldon grew up an orphan in Southern California and was adopted by a Japanese American family, the Nakanos, as a teenager. Though shocked by his adoptive family’s incarceration at Manzanar during the war, he volunteered for military service and became a war hero, with his rudimentary knowledge of the Japanese language playing a role. As a Marine, Gabaldon singlehandedly captured over 1,500 Japanese soldiers and civilians on the Island of Saipan during the fighting there in mid-1944.

The story of Guy Gabaldon and his wartime exploits on Saipan remained largely unknown to the public until 1957, when Gabaldon was a guest on Ralph Edwards’s popular television show This is Your Life. After his appearance, producer Irving H. Levin and screenwriter Bill Doud began work on a screen adaptation that resulted in the heavily fictionalized 1960 Hollywood film, Hell to Eternity. As outlined in his Densho Encyclopedia article, Greg Robinson notes that Gabaldon was played in the movie by a much taller white actor, Jeffrey Hunter. In addition to its portrait of Gabaldon’s wartime heroism, Hell to Eternity is notable as the first Hollywood film to portray the wartime confinement of Japanese Americans.

Many years later, Gabaldon was also the subject of a documentary film, East LA Marine. Guy Gabaldon on the set of “Hell to Eternity” with Jeffrey Hunter, David Janssen, and Vic Damone. Photo courtesy of GuyGabaldon.com.

Although there are few depictions of Japanese American/Latino interactions during the chaotic war and incarceration years in the scholarly literature, there are a handful of films, children’s books, and plays that examine the topic. 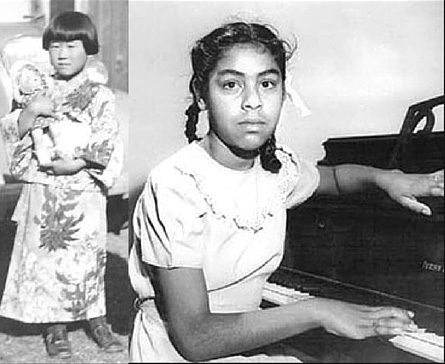 Children’s books of recent decades go to great lengths to feature multicultural stories. But even as early as 1943, the children’s book The Pigtail Twins by Anne M. Halliday includes a Japanese American and a Mexican American child among its main characters. The brief mention of the Japanese American family’s forced removal might be the first in any book-length work of fiction. Among the students in the class as the book begins is Kasumi Ozamoto, described as the “child of a Japanese market gardener.” One of the book’s subplots involves the arrival of his cousins, Tooru and Satoko Oyama. In announcing their arrival, Miss Emeline tells the class “Tooru and Satoko have come from California to live with Kasumi and his mother and father. Now they will not have to go to one of the wartime camps.”

More recently, the children’s book Sylvia & Aki (2011) by Winifred Conkling tells the (mostly) true story of how the lives of two third grade girls from different backgrounds crossed paths. Aki Munemitsu and her family were sent to hot and dusty Poston where they shared their already cramped room with three other families. In the book, Aki is miserable, misses her father, and longs for the life she used to have. Sylvia Mendez and her family rented the Munemitsus’ farm in Orange County, California. Sylvia and her cousins were denied registration at the nearby school because of their Mexican American heritage. This began what would be Sylvia’s father’s landmark education case, Mendez vs. Westminster School District, which fought segregation in California schools and set a precedent that would lead the way to equality in national education. The book features alternating chapters between the girls’ stories, Sylvia and Aki begin writing letters to each other, with their friendship continuing to the present.

Two recent plays, Oliver Mayer’s Conjunto (2003) and Luis Valdez’s Valley of the Heart (2013) tell stories about Japanese American and Mexican American farmers and farm workers whose lives are complicated by the mass removal and incarceration of the former.

Finally, the historic working class neighborhood east of downtown Los Angeles known as Boyle Heights—home to Japanese Americans and Mexican Americans, among various other ethnic groups—is the subject of the 2002 film Crossroads: Boyle Heights, which was made by the Japanese American National Museum as a companion to the exhibition “Boyle Heights: The Power of Place.”