A visit to Tokyo by Tom Ikeda

Below are my daily notes from a whirlwind visit to Tokyo a couple of weeks ago. The purpose of the visit was to see some of the people I met two years ago with a similar delegation of Japanese Americans.

May 9th – I am back in Tokyo! In 2008 I was a member of the Japanese American Leadership Delegation that spent 10 days in Tokyo, Fukuoka, and Kyoto. This was an intense and wonderful experience of meetings with high level government, business, cultural and political leaders that sparked an interest for me to learn more about Japan, and the relationship between the US and Japan. So when Kaz Maniwa of San Francisco suggested a return trip of former delegates I enthusiastically agreed. (A quick sidenote for those of you who know Kaz – my enthusiasm for the trip was also to be able to spend a week with Kaz and his wicked sense of humor, trying to avoid being the brunt of his jokes!)

However, this trip is very different than the 2008 trip. The costs for this trip are not being paid by the Japanese government, so to save money, I am traveling economy – cheapest coach airfare I could find (Seattle to LA to Narita), and public transportation in Tokyo – very different than the first class transportation I received as a delegate in 2008! After everyone arrived in our hotel in Shinagawa (Pacific Tokyo), our first group meeting was Sunday night in the shared hotel room of Bobby Ichikawa (Honolulu) and Craig Uchida (Washington DC). It was a little reminiscent of being back in a college dorm room while the nine of us talked while sprawled out on the floor, beds, and chairs (drinking beer) talking about the plans for the coming days. In addition to Bobby and Craig, others in the room were Kaz Maniwa (San Francisco), Dianne Fukami (San Francisco), Debra Nakatomi (Los Angeles), Patty Kinaga (Los Angeles), Stan Koyanagi (Los Angeles), and Susan Eichor (Honolulu). 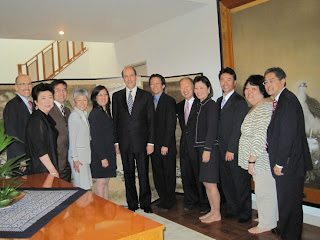 May 10th – The day started with a 7am breakfast with US Ambassador John Roos, U.S. Embassy Deputy Chief of Mission Jim Zumwalt, and Director of the Tokyo American Center Ann Kambara Zumwalt hosted by the Zumwalts – and ended at 11pm coming back on the subway after having a long dinner conversation with Tadakatsu Sano, Prime Minister Hatoyama’s Chief Executive Assistant. The day was long, but incredibly engaging as we were able to schedule long meetings (1-3 hours) so that there was time for deeper discussion and questions. We were also able to hear different perspectives. In addition to the US Ambassador and the Chief Secretary to the Prime Minister, we had long conversations with Hideo Tamura, a business journalist with the Sankei Shimbun, various officials in Ministry of Foreign Affairs – MOFA (Press Secretary Kodama, Ambassador Nakamura and Mori, and a larger meeting with various officials around the issue of High Speed Rail (HSR).

I came away from these meetings with a better appreciation for the profound change that is happening in Japan today – and the difficulties and challenges of making these changes. Although Futenma is getting much of the focus these days, I believe it is a minor issue compared to some of the structural, strategic changes happening in how Japan will be governed in the future. 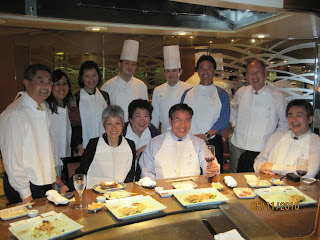 May 11th – The highlights of Day Two were a lunch meeting hosted by the Japan Foundation’s Center for Global Partnership (CGP), a meeting with Ambassador Kato (Commissioner of Nippon Professional Baseball, Former Ambassador to the US), and an amazing dinner at the Royal Park Hotel.

Over the past two years I’ve gained a deep admiration for the work of the Japan Foundation and CGP. During the lunch meeting they shared some of their ongoing work. Masaru Sakato (Executive Vice President, Japan Foundation and acting Executive Director, CGP) presented an interesting paper looking at the flow of people between the US and Japan. Something that really caught my attention was the dramatic drop in the number of Japanese students studying in the US. Our friends at CGP also arranged several excellent and thought provoking presentations from the Nippon Foundation, the Japan Center for International Exchange, and the Sasakawa Peace Foundation.

After a couple of hours of shopping in the Ginza, we had a FABULOUS dinner at the Royal Park Hotel. Dan Nakamura, the general manager of the hotel is a personal friend of Kaz and we were treated like royalty. I can honestly say that this was one of the best dinners I’ve ever had in my life. The flavors, quality of ingredients, and good company made this a very special evening. We were then led back to our hotel on the subway (couple of transfers, lots of walking) with the great navigation from Susan Eichor and her trusty subway map! 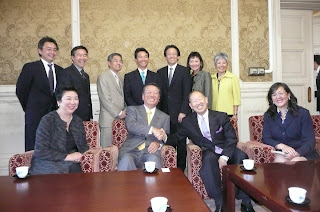 May 12th – Day three was filled with meetings at MOFA, the Japan Times, the Diet Building, and with Ambassador Yanai. Again we heard different perspectives from a diverse group. Our first meeting was led by Kazuyoshi Umemoto, MOFA, Director-General N.A. Affairs Bureau to discuss US-Japan relations. We then met with Takashi Kitazumi, Managing Editor of the Japan Times for a media perspective. With no time for lunch, we grabbed taxis to meet with Ambassador Yanai to get his personal thoughts about what is happening in Japan.

We then went to the Diet Building for a 30 minute meeting with Ichiro Ozawa, Chairman of the DPJ. This meeting was made possible by Kaz Maniwa’s involvement in the John Manjiro project which Ozawa supports. We then had a meeting with Takeaki Matsumoto where he described some of the reforms happening in the Diet to speed the process of legislation. Our day at the Diet ended with an engaging discussion with a dozen or so Diet members from the DPJ party – many of whom were young, 1st-time elected members.

We finally got our lunch/dinner after taking the subway to the Tokyo Dome to catch a baseball game between the Tokyo Giants and Seibu Lions – my first experience with Japanese baseball! (Thank you to LA Consul Hiroshi Furusawa and Ambassador Kato for helping to arrange this!!)

May 13th – Kaz Maniwa has been able to lead our group with a blend of protocol, vision, caring, and humor. The humor has been especially appreciated as the days can get pretty long and tiring. During the week each of us has been the target of Kaz’s quick wit and ribbing. An example of this occurred this morning while on the subway to our first meeting. Kaz dresses very stylishly and likes to compliment others when he likes what they wear. This morning Craig Uchida was wearing a beautiful pink tie that Debra Nakatomi admired. As we all agreed how we liked the tie, Kaz was a step ahead of us and started commenting on Craig’s dress “ensemble.” What Kaz had noticed was that Craig had accidently mixed-up his suit pants (grey stripes) with his suit jacket (solid grey) – and so Kaz did an impromptu, very funny presentation of Craig’s “fashion statement.”

After this fun moment, we had a fascinating discussion with Hitoshi Tanaka about the US-Japan Security Alliance – a topic he had presented a couple of days ago in San Francisco. After this meeting, the women in the group met with Royanne Doi to discuss women issues in Japan, and the men met with Paul Yonemine to discuss Paul’s experience doing business in Japan as a Japanese American. After lunch we rejoined the women and met with Sakihito Ozawa, Minister of the Environment of Japan, and then a long meeting and dinner with Taro Kono, member of the House of Representatives and a leader of the LDP.

May 14th – On Friday morning members of the group participated in smaller, topic focused meetings. For example, Kaz Maniwa and I met with Hideyuki Inoue, a young professor at Keio University and President of Social Venture Partners Tokyo whose area of expertise is social entrepreneurship in Japan. Hideyuki gave us a perspective about Japan that was positive and global.

For lunch, seven of us met (Patty Kinaga and Stan Koyanagi had flights to catch) with Mr. Shibuya and Mr. Endo at the Sumitomo Corporation Tokyo Head Office to get a Japanese business perspective of Japan. We ate on the 39th floor of the building giving us panoramic views of Tokyo Bay.

We then grabbed taxis to catch what was expected to be a short meeting with Transport Minister Maehara. The meeting ended up being an involved discussion about High Speed Rail spearheaded by Debra Nakatomi. After this meeting we went to the Ministry of Defense to meet with Vice Minister Nagashima, a top security expert, where Kaz had to explain that there was this place called Futenma located in Okinawa – just kidding (inside joke).

Our last scheduled function for the trip was an informal dinner with about a dozen MOFA and other ministry officials for a chance to drink, eat, and chat. This dinner was arranged by Akira Tsubokura who was our Japanese guide and friend during the week and who was invaluable by confirming meeting locations and times, and helping us get there on time while taking the subway most of the time. This last function was a great way to end a fascinating and productive week of meetings.