Interviews in Minneapolis by Tom

The Twin Cities Chapter of the JACL welcomed us last week with a Monday potluck dinner. This was a fun evening of eating homemade Japanese food, talking with the Chapter oral history committee, and getting to know better the men and women we would be interviewing in the following days. My favorite food was the homemade mochi that interviewee Helen Tsuchiya made for the group!

Below are a few tidbits about the interviews I did on this trip.

On Tuesday morning I started my interviewing with Yo Matsumoto. Yo grew up in the San Diego area and was going to UC Berkeley when the war started. Yo was sent to the Tanforan “assembly center” and was one of a few Nisei selected for early release to attend school at Washington University in St. Louis. After serving in the army in Europe, Yo joined his family in Detroit and then relocated to St. Paul as an engineer with the 3M Company.

Tuesday afternoon I interviewed Joe Uemura. Joe grew up in Denver where his father was the long-time minister of the Japanese Methodist Church. Joe recounts being the son of a minister and the frightening story of the stained glass windows of the church being shattered by vigilantes during the days following the bombing of Pearl Harbor. Joe also describes the many families that lived at the church during and after the war while trying to find a place to resettle. 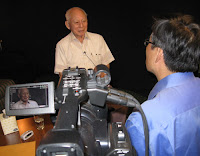 Noon Wednesday I interviewed Yosh Matsuura. Yosh grew up in Fowler, California. As successful farmers, Yosh’s family suffered big losses when they were removed to the Gila River camp. Yosh was able to leave Gila River for Minneapolis to join the National Youth Administration (NYA) training program. A few days after arriving for the program the government expelled all Nisei youth and had them fend for themselves without room and board. Yosh was able to find employment and then was drafted into the army where he served with the Military Intelligence Service.

Wednesday evening I interviewed George Yoshino. George grew up on a farm in Bellevue, Washington. One of the jobs that George had after graduating from high school was oyster farming in the Puget Sound. George and his family were removed to Pinedale and then to Tule Lake after the war started. George described going out on temporary work crews from the camps with Issei men working on the railroad and on farms. George later served in the MIS.

Noon Thursday I interviewed Harry Umeda. Harry was the oldest interviewee I had on this trip at 94 years old. Harry grew up in the Sacramento area and was drafted into the army before WWII started. He talked about how the Nisei soldiers were segregated after the war started and how he eventually joined the MIS. Harry told gut wrenching stories about interviewing half-starved Japanese POWs in New Guinea.

At the end of Thursday we packed our gear and the very tired Densho crew of Megan Asaka, Dana Hoshide and I caught a flight back to Seattle.