The Chinatown-International District has been the center of Seattle’s Asian and Asian American community life for more than a century. But the region is defined as much by protest and resistance as it is by its cultural riches. Forty-five years ago, in 1972, a group of multiethnic activists banded together to oppose construction of the Kingdome, a development they predicted would bring unwelcome changes to the community. As the neighborhood once again faces gentrification and encroachment of outside interests, there are lessons to be learned from the battle against the Kingdome. The following look back at this historic protest is excerpted from the introduction of Serve the People: Making Asian America in the Long Sixties, a groundbreaking new history of the Asian American movement by Karen L. Ishizuka (Verso, 2016).

The International District of Seattle—or ID, as it is affectionately known locally—is unique in Asian America for being the only place in the continental United States where Chinese, Japanese and Filipinos comprise one multiethnic community.25  Originating as a Chinatown in the late 1890s with Nihonmachi as its neighbor, by the early 1900s the area had become a haven for Filipino immigrants and in the 1920s was also infused with African American and Native American inhabitants and businesses. The ID was the setting for such Asian American literary classics as Monica Sone’s Nisei Daughter (1953) and John Okada’s No-No Boy (1957); it is where Carlos Bulosan (America Is in the Heart, 1946) worked as a labor leader. One of the oldest neighborhoods in Seattle, a substantial portion of the ID is now on the National Register of Historic Places.

The Asian Coalition for Equality, founded by Phil Hayasaka, was the first pan–Asian American activist organization in Seattle. It was the forerunner of the International District Improvement Association (Inter*Im), a multiethnic group formed to improve the declining conditions of the ID. According to Bob Santos, who served as executive director of Inter*Im during its years of fighting for the preservation of the ID (1972–86), “Phil actually was the one who got a lot of us involved.”

Affectionately called “Uncle Bob,” an honorary Filipino appellation of respect, Bob began a lifetime of activism after being cajoled into joining his first picket and realizing that discrimination did not have to be a fact of life. When Bob became the head of CARITAS, a social service action agency, he managed the St. Peter Claver Center, which he opened up to a variety of activist groups including the Black Panthers, United Farm Workers, United Indians of All Tribes, and El Centro de la Raza. From that time forward, whenever the Asian American or the International District needed widespread support, they would inevitably call on Uncle Bob, who would call out the troops. At Inter*Im, whenever a hostile issue would arise, Bob and his staff would retreat to what they ceremoniously called “the war room,” which Bob confessed was a card table:

But we wanted a military-sounding place where we would strategize about attacking the enemy. I considered each issue to be part of the strategy of what I used to call “payback.” I never screamed racism. I never talked about being discriminated against. It was always about getting even.

The battle surrounding the building of the Kingdome, a multi-purpose stadium that encroached on the already depressed ID in 1972, became a cause célèbre that, as journalist Mayumi Tsutakawa reported, spurred the Asian American community’s coming of age.26

When the county held the dedication for the groundbreaking, then student activist Al Sugiyama recalled, “That’s when Frankie [Irigon] posted a note on the Asian Student Coalition [at the University of Washington] door and said, ‘Let’s go protest against the Kingdome.’ I called him and asked, ‘How many people do you have?’ He said, ‘Two—me and you.’” Two became twenty-five, and with shouts of “Stop the Stadium” and dirt clods thrown in the general direction of the podium, Al said their goal was not to stop it, but “to disrupt the party, to show the press and elected officials that we wanted our voices heard.”27 And that’s what they did.

As the Seattle Civil Rights and Labor History Project noted, the media coverage that was generated brought attention to concerns that had up to that time been ignored and challenged stereotypes about passive Asians.28 Since nothing could be done about the building of the stadium, community activists parlayed the resulting energy and attention into securing public and fiscal support for building low-income housing for the elderly and providing bilingual social services—both long-identified needs. They succeeded on both counts.

After studying neighborhoods in cities along the Pacific Coast such as Chinatown/Manilatown in San Francisco and Little Tokyo in Los Angeles, Bob testified before the Seattle City Council. “Urban centers all across the nation are losing downtown neighborhoods to progress at the expense of the pioneers who built these cities. And we in the International District refuse to follow this trend.” Within the decade, in addition to several low-cost housing units subsidized by the Department of Housing and Urban Development, a variety of service groups and agencies were established to address the health and welfare of the ID and ensure its preservation.30 The ID is still going strong. As testament to its endurance, of the many Sixties activists I spoke to about the Asian American movement—specifically regarding how and why it ended—those in Seattle alone said it had never stopped.

Header photo: Activists protest the Kingdome in the 1970s, courtesy of Gold Bee.

Excerpt by Karen Ishizuka from her book, Serve the People: Making Asian America in the Long Sixties (Verso Books, 2016)
About the book: Until the political ferment of the Long Sixties, there were no Asian Americans. There were only isolated communities of mostly Chinese, Japanese, and Filipinos lumped together as “Orientals.” Serve the People tells the story of the social and cultural movement that knit these disparate communities into a political identity, the history of how—and why—the double consciousness of Asian America came to be. Read more. 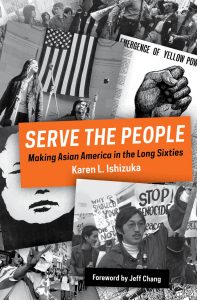