Thank you so much for making the Densho Virtual Gala a very special event! Even though we weren’t able to gather in person, we were blown away by the incredible engagement and support from all of you who tuned in live on Wednesday evening. Make a gift to help Densho continue our work to preserve Japanese American stories of the past for the generations of tomorrow.

In honor of Tom’s 27 years of service to Densho, the Board, past and present, and the Oki Foundation are matching every donation, dollar for dollar up to $500,000. Double your impact by donating to Densho today! Toshiko Grace Hasegawa
MC
Toshiko Grace Hasegawa has over ten years’ experience in community advocacy around civil rights issues, and was appointed by Governor Jay Inslee as Executive Director of the Washington State Commission on Asian Pacific American Affairs (CAPAA) in October 2018. In 2021, she was elected and is currently serving as Commissioner for the Port of Seattle. Toshiko is a writer and notable public speaker. She particularly enjoys speaking to young and emerging women and PoC leaders and is passionate about community empowerment, political organizing, and direct advocacy to lawmakers. Toshiko holds two Bachelor’s Degrees from Seattle University, as well as a Master’s degree in Criminal Justice, with a specialization in investigative criminology. Toshiko is a 4th-generation Washingtonian from the Beacon Hill neighborhood in Seattle, where she lives today with her husband Michael and daughter Keiko Rose in the family home. She has studied and lived internationally and speaks Spanish fluently. For leisure, she enjoys traditional Tahitian dance, creative writing and backpacking through the Pacific Northwest. Tom Ikeda
Founding Executive Director
Tom Ikeda (he/him) is the founding Executive Director of Densho. Tom is a sansei (third generation Japanese American) who was born and raised in Seattle. Tom’s parents and grandparents were incarcerated during World War II at Minidoka, Idaho. In addition to leading the organization over the last 24 years, Tom has conducted more than 250 video-recorded, oral history interviews with Japanese Americans. Prior to working at Densho, Tom was a General Manager at Microsoft Corporation in the Multimedia Publishing Group. Tom has received numerous awards for his community and historical contributions, including the Humanities Washington Award for outstanding achievement in the public humanities, the National JACL Japanese American of the Biennium Award, the Microsoft Alumni Integral Fellows Award, the Japanese American National Museum Founder’s Award, and the Robert Gray Medal from the Washington State Historical Society. 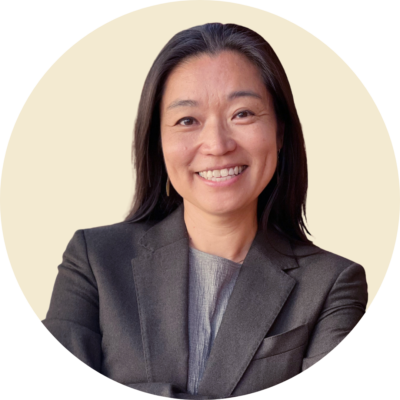 Naomi Ostwald Kawamura
Incoming Executive Director
Naomi Ostwald Kawamura (she/her) is the incoming Executive Director of Densho. She graduated from the University of Washington with a BFA in Metal Design and holds a Master’s degree in Education from the Harvard Graduate School of Education. She is currently completing doctoral work in the Faculty of Education at the University of British Columbia, focusing on the intergenerational transfer of memory in the Japanese American and Japanese Canadian communities. She writes on the unique challenges and issues that community history organizations face with the passing of those who survived the forcible removal and incarceration of people of Japanese descent in Canada and the United States.

Prior to Densho, Naomi was the Executive Director of the Nikkei Place Foundation, a Japanese Canadian organization based in British Columbia, Canada. She has also held leadership positions at the San Diego History Center, the California Center for the Arts, and BAVC Media, among others. She is currently the Board President of the Museum Education Roundtable, a Washington DC based organization that publishes the Journal of Museum Education. Naomi has also published articles in peer-reviewed journals and has authored a chapter in "Negotiating Ethnic Diversity and National Identity in History Education: International and Comparative Perspectives," edited by Helen Ting Mu Hung and Luigi Cajani (Forthcoming December 2022, Palgrave MacMillan). Dominique Stephens
MC
Dominique Stephens (she/her) is a native of Seattle, whose roots run deep in civil rights and social justice. After graduating from Nathan Hale H.S. She went on to attend Tennessee State University, where she studied Philosophy and Religious Studies.

Dominique has worked with the City of Seattle in various roles, from starting as an External Relations Liaison to Co-Director of External Relations and Outreach for the Mayor’s office.
Dominique now serves as Interim Executive Director for Ingersoll Gender Center. Dominique is a former Seattle LGBTQ Commissioner and board member for Equal Rights Washington (ERW) and the Coalition of Immigrants, Refugees and Communities of Color (CIRCC).

Currently, Dominique sits on the board for FEEST Seattle, POCAAN and the Greater Seattle Business Association (GSBA).

Dominique adheres to the Sankofa philosophy ‘Before we proceed forward, we should retrieve things of value from our knowledge of the past,’ and injects this principle into all of her work for the Seattle community. Writers Respond
Karen L. Ishizuka, Lauren Ito, Nikiko Masumoto, & Lane Tomosumi Shigihara
Four featured writers will perform a reading of their creative responses to photos from the Densho archives and other archival collections—illuminating the stories of hope, resistance, and resilience passed down in these historic images.

Karen L. Ishizuka is a sansei descendent of Manzanar and Jerome concentration camps. Presently chief curator of the Japanese American National Museum (JANM), she is author of Lost & Found: Reclaiming the Japanese American Incarceration, Serve the People: Making Asian America in the Long Sixties and co-editor of Mining the Home Movie: Excavations of Histories and Memories. Her essay on art about the WWII incarceration — “Art Saved Us … from What?” — was recently published in Are the Arts Essential?

Lauren Ito is a gosei (fifth generation Japanese American) poet, photographer, and community craftswoman from an island outside Seattle. Her writing explores the tensions of choice and force within identity, inheritance, and home. Lauren’s work has been featured by The San Francisco Public Library, The Seattle Times, Japanese American National Museum, Nomadic Press, and in various performance venues, including the Mission Arts Performance Project, BEAT Museum, and Gears Turning. Her most recent publication is the San Francisco’s Poet Laureate’s series, The City is Already Speaking. She lives in San Francisco, and can almost always be found by the sea.

Nikiko Masumoto is a fourth generation Japanese American, and gets to touch the same soil her great-grandparents worked in California where Masumoto Family Farm grows organic nectarines, apricots, peaches and grapes for raisins. With her family, she’s co-authored two books: Changing Season and The Perfect Peach.

Lane Tomosumi Shigihara is a Gosei poet and advocate of digital transformation and inspiring intentional introspection through the arts. Find more of his work at www.tomosumi.com. Hisako's House Performance
Robyn Mineko Williams & Jacqueline Burnett
Director and dance maker Robyn Mineko Williams will share an exclusive preview of her immersive, dance-based performance Hisako’s House for the 2022 Densho Gala. The piece is rooted in curiosity about her Japanese American family’s experience before, during, and after the incarceration of WWII, as well as the intergenerational trauma and resilience that followed. Hisako’s House is built to be malleable in form and able to be presented in a range of spaces: national parks, stages, historical sites, museums and more. Williams’ performance at the 2022 Densho Gala alongside dancer Jacqueline Burnett will mark the first public viewing of her new work in progress.

Robyn Mineko Williams (she/her) is a multi-disciplinary artist, director and producer. Following her career as a dancer at River North Dance Company and Hubbard Street Dance Chicago, the Chicago-native shifted her focus to artistic creation and collaboration. As a dance maker, Robyn has choreographed commissions for Pacific Northwest Ballet, Hubbard Street Dance Chicago, Seattle Dance Collective, Malpaso Dance Company, Charlotte Ballet among others. A Princess Grace Foundation-USA grant recipient and 2014 Dance Magazine’s “25 to Watch,” Robyn has had her work presented at Kennedy Center, Harris Theater for Music and Dance, Jacob’s Pillow, the Joyce Theater, MCA Chicago and more. Visit robynminekowilliams.com to learn more about her work.

Jacqueline Burnett (she/her) received her ballet training in Pocatello, Idaho, from Romanian Ballet Master Marius Zirra. She moved to NYC in 2005 for the Ailey School/Fordham University BFA program, graduating magna cum laude with honors (2009). She joined HSDC in 2008 as a Center Apprentice and joined the main company in 2009. Jacqueline received a Princess Grace Honorarium in 2011 and with HSDC was part of DanceMotion USA 2013, a cultural diplomacy tour in Algeria, Morocco, and Spain. Jacqueline has served as an Artistic Lead and teacher for HSDC Summer Intensives, a repetitor for Penny Saunders, and a freelance dancer with Robyn Mineko Williams and Artists and Seattle Dance Collective. Jacqueline recently choreographed for Milwaukee Rep’s Murder on the Orient Express directed by Annika Boras and co-choreographed with David Schultz a new commission for Danza Visual in Mexico City.

Stir up some spirits while tuning in to our virtual gala on November 2! Neil Yamamoto – a man once dubbed “Seattle’s favorite bartender” – concocted three specialty cocktail recipes for you to enjoy from the comfort of your own home! Shake all with ice for 10-15 seconds or stir for 30 seconds. Pour into a highball glass. Garnish with a lemon twist. This recipe also works well with tequila.

Bruise ginger with a spoon, add other ingredients. shake for 10-15 seconds, or stir for 30 seconds. Strain into a martini glass or on the rocks in a highball glass.

Shake for 10-15 seconds or stir for 30 seconds. Strain into a martini glass or on the rocks in a highball glass. Thank you to our sponsors for helping us celebrate with our friends near and far!